The Cost of Misclassifying Independent Contractors 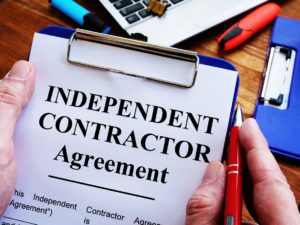 In an effort to protect workers’ rights, the U.S. implemented the Fair Labor Standards Act (FLSA) in 1938. This law established standards regarding minimum wage, overtime pay, record keeping, and youth employment. Covering most employees in the private sector and in federal, state, and local governments, violations of this law have proven to be very costly for many employers.

One of the most common violations occurs when an employer incorrectly classifies an employee as an independent contractor. The U.S. Department of Labor (DOL) estimates that 10-30% of employers have misclassified workers. This violation alone can lead to significant fines not only from the DOL, but also from the IRS and various state agencies. As more states begin cracking down, and with the recent “final rule” published by the DOL, it is more important than ever to review how your workers are classified

In 2013, the Obama Administration estimated that implementing efforts to reduce misclassification would bring in $8.32 billion in federal revenue within 10 years. Since then, the DOL has been working on revisions to its interpretation of independent contractor status to ensure that fewer companies misclassified workers. As a result, on January 6, 2021, the DOL issued its final rule addressing whether a worker will be considered an independent contractor, rather than an employee, under the FLSA.

The second factor weighs in favor of independent contractor classification if the worker has an opportunity for profit or loss based on: the exercise of personal initiative, including managerial skill or business acumen, and/or the management of investments in, or capital expenditure on such items as helpers, equipment, or material.

Are there any other factors to consider?

Yes, however, the other three factors hold much less weight in the determination. These may be relevant only if they specifically are needed to demonstrate whether a worker is in business for themselves, as opposed to being economically dependent on the employer for work. These are as follows:

While the final rule is slated to go into effect on March 8, 2021, it is still unclear how the new administration will deal with the rule. If permitted, the rule will give employers clarity in determining whether a worker is an employee or independent contractor under the FLSA. For now, businesses are advised to treat the new rule as guidance.

ECRM can help you evaluate your work relationships in light of the new guidance.  Please contact us at by calling 724-864-8745 or by emailing us at hrhelpline@eastcoastrm.com.